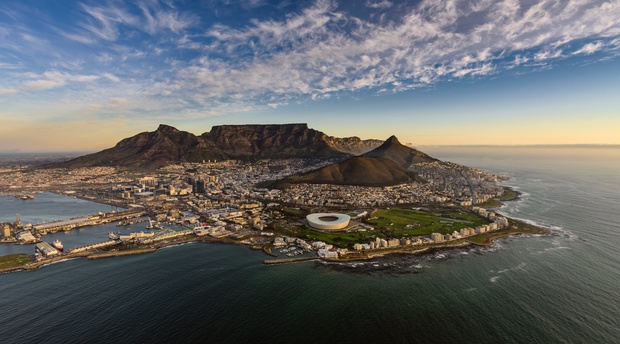 A Cape Town City Tour would not be complete without seeing Table Mountain. Voted as one of the New Seven Wonders of the World in 2011, its famous flat-topped summit offers spectacular panoramic views of the cityscape, and ocean beyond, and the lush nature reserve and forest that surrounds it boasts one of the world’s richest floral kingdoms. 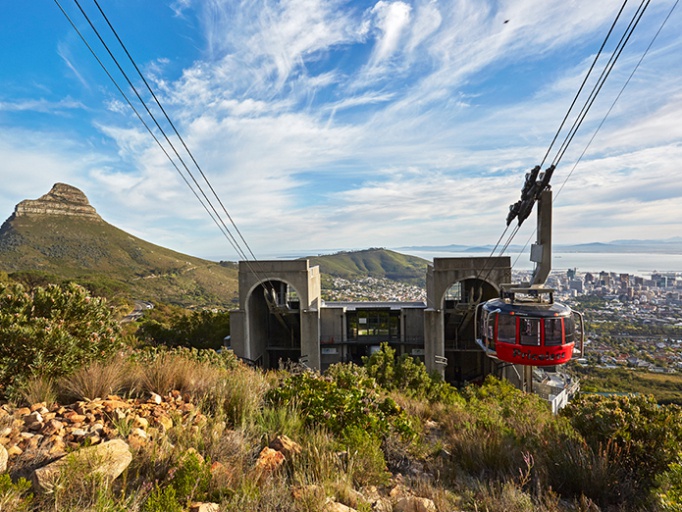 Look forward to visiting the Table Mountain flattop which is Cape Town’s #1 Attraction that offers breathtaking views of the Mother City, the busy harbor, and boats heading for Robben Island, the notorious prison that once held Nelson Mandela, which is now a museum and part of the Big 7 attractions in Cape Town.

Where is Table Mountain located?

Table Mountain is found in Cape Town, South Africa. Cape Town is located in the Western Province and is South Africa’s legislative capital. It is fondly known as the “Mother City” and it is a favorite holiday destination among many tourists and locals visiting Cape Town city every year.

Table Mountain forms part of the Table Mountain National Park which was recognised in 2012 as one of the 'New7Wonders of Nature' and it also boasts UNESCO heritage status. 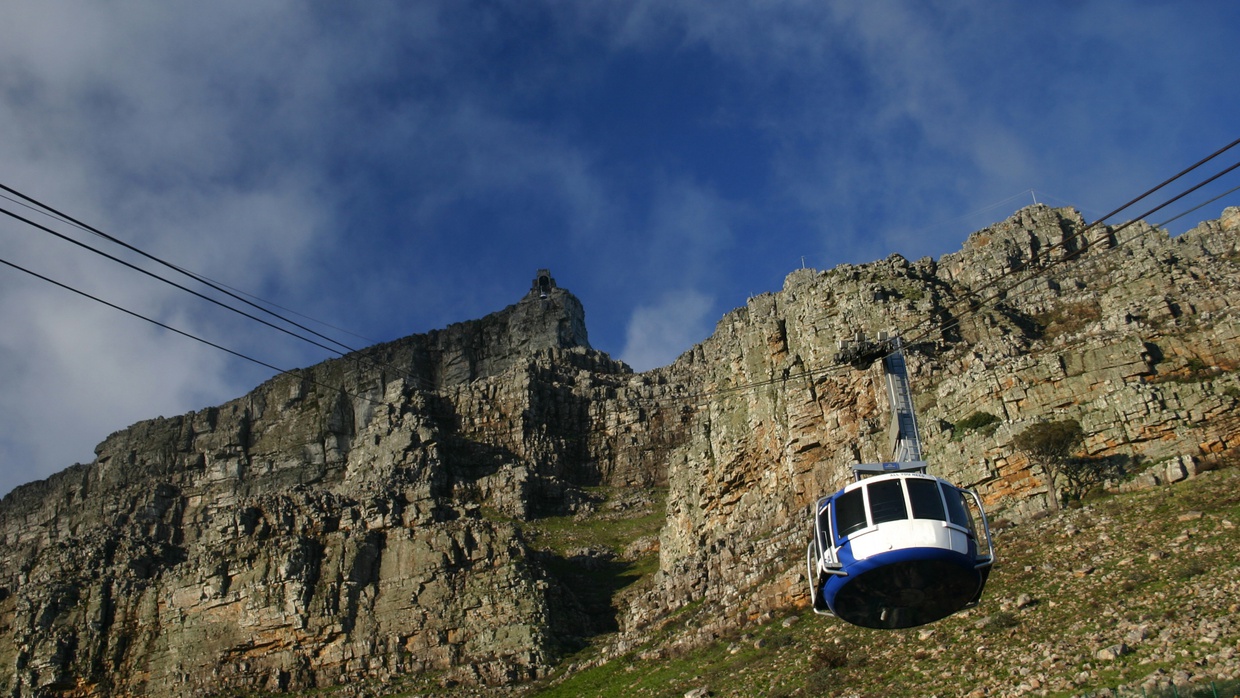 How long is Table Mountain?

Rising 1,087 meters south of the city center, Table Mountain flat-top is probably the most photographed landmark in South Africa. Flanked by Devil's Peak and Lion's Head, Table Mountain makes up the northern end of the Cape Fold Mountain range. It's hard to imagine, but the mountain's distinctive flat top is a three-kilometer level plateau that is believed to have been the bottom of a valley!

A layer of clouds, called the "tablecloth" frequently cloaks the mountain's peak, but when the clouds clear, visitors can enjoy spectacular views of the Mother City in Cape Town and the entire Cape Peninsula from the summit. 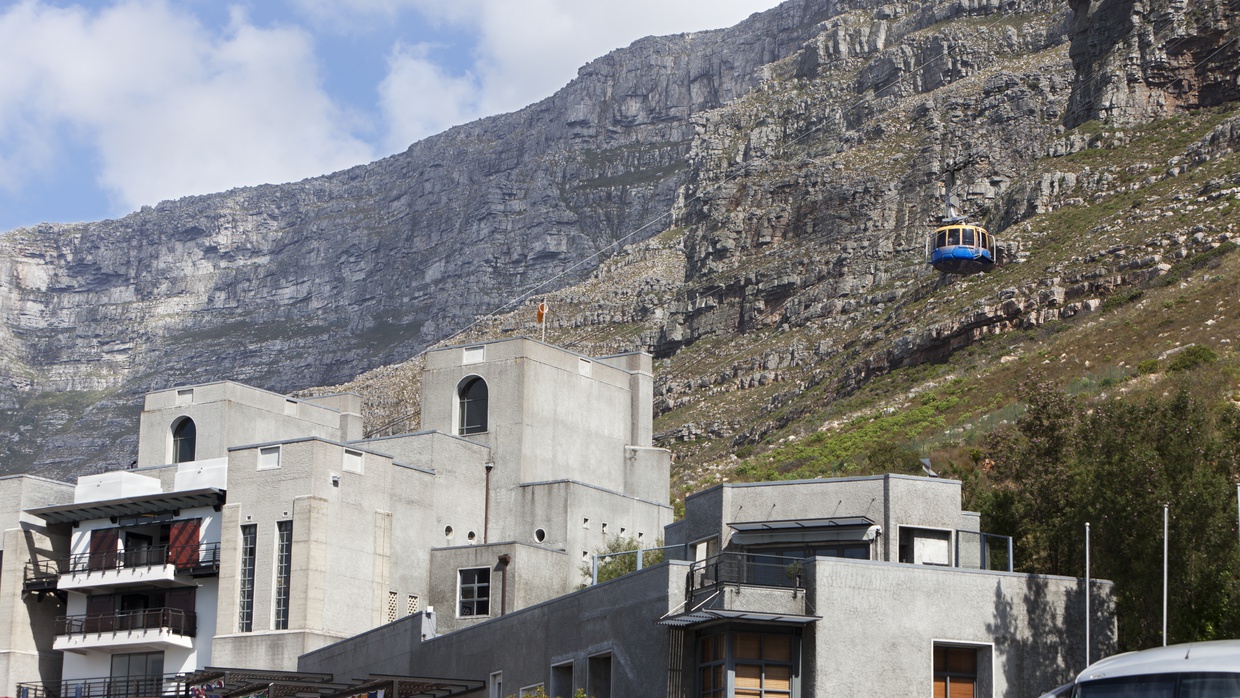 When you arrive, you can take the Table Mountain Cable car (subject to good weather conditions), and summit to the top. . Riding the Cable Car is an unmissable experience in itself, and when you reach the top you’ll be amazed by the grandeur of the views from Table Mountain. (Own expense). Because the cable car floor rotates slowly, you'll get to enjoy views in every direction

Due to its popularity, it is recommended that you book tickets to avoid any disappointment.

Cape Town city has a Mediterranean climate, with rainy winters and dry summers. The weather in Cape Town's summer months which are October to March are usually the best time to ride in the cable car. But it is always a good idea to check the weather before booking tickets.

The cableway will be closed when the weather conditions are not ideal. 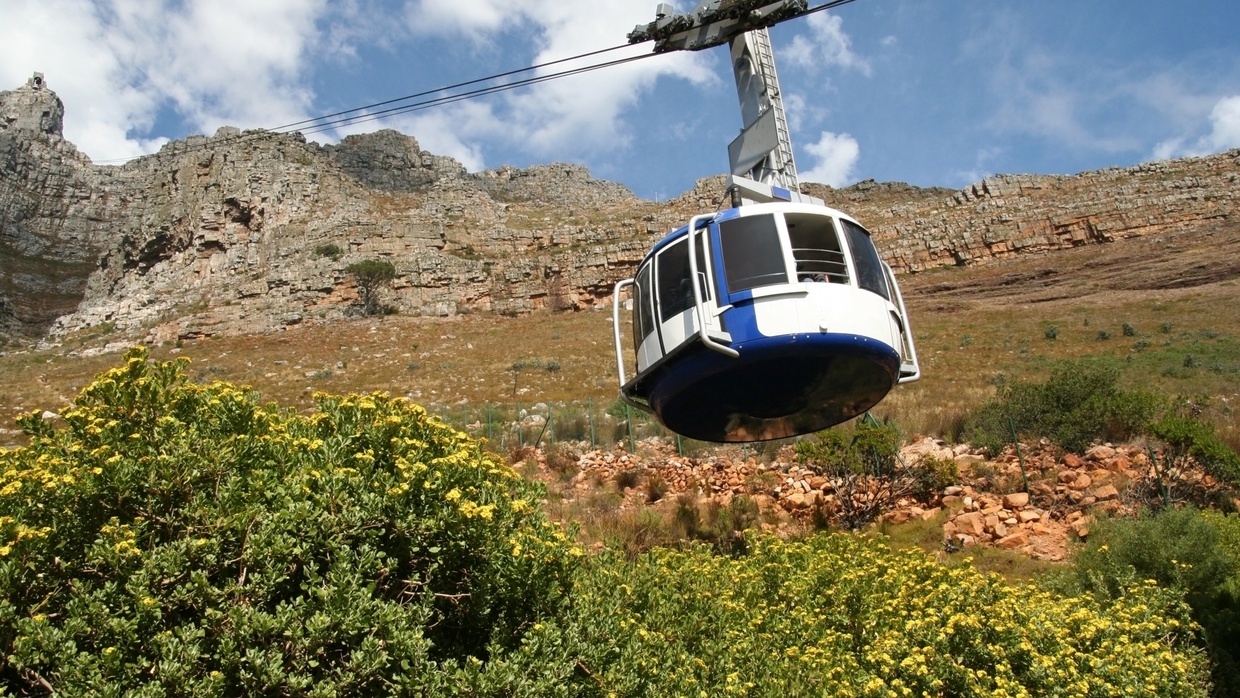 How long is a cable car ride?

The cable car takes less than 10 minutes to reach the top of Table Mountain.

It is one of Cape Town's most popular tourist attractions with approximately one million people a year using the Cableway. In January 2019, Cableway welcomed its 28 millionth visitor.

The cableway that transports visitors to the top was built in 1929. The capacity of the first cable car was 25 people. Today it can carry 65 visitors.

The journey is done at a gentle speed and takes around five minutes. The cable car is modern and slowly rotates, giving you incredible views of the city as you make your way to the 3,500ft summit. 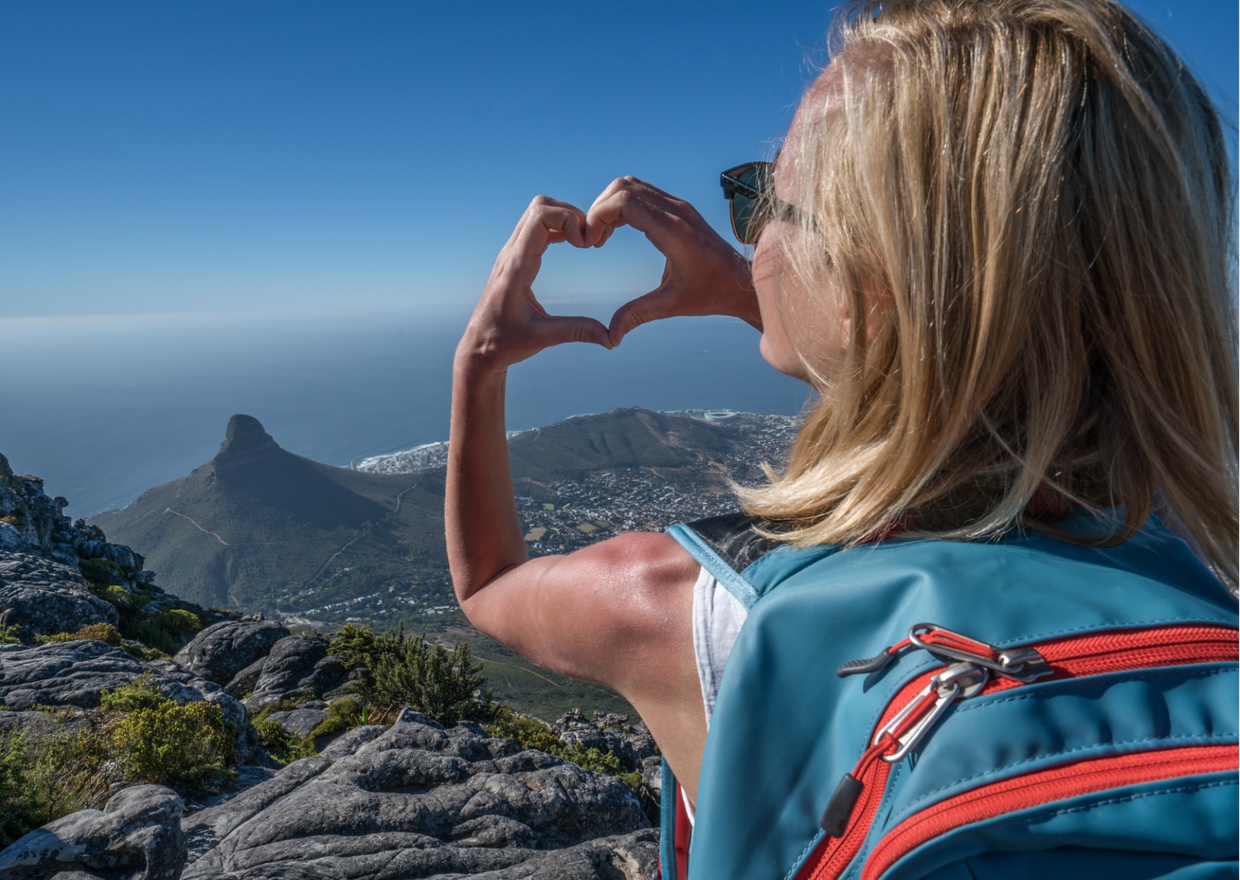 For the more adventurous traveler, you could opt to trek up Table mountain and hike the huge Platteklip Gorge that runs through the centre of the mountain. The trail zig-zags in a gradual ascent and takes an average of two hours to climb. Along the way, stop to admire the indigenous fynbos vegetation with 2,200 plant species identified on Table Mountain. (Own expense)

Those venturing into the Table Mountain National Park should have the following emergency numbers on hand: 086 110 6417/ 107 or 021 480 7700. Criminal incidents should be reported to the nearest police station as soon as able.

We also recommend @safetymountain as a useful resource for hikers. This free safety tracking service allows you to notify local trackers of your contact details, intended route, and travel time via WhatsApp. You are then able to provide hourly updates on your progress and notify trackers when you are safely off the mountain.

What is there to do on Table Mountain?

Located in a World Heritage site, the majestic flat-topped Mountain is Cape Town’s most famous landmark and also a popular proposal spot with two couples getting engaged on the mountain every month!
If you’re keen to stretch your legs, you can explore the beautiful hiking trails along footpaths and breath in the attractive and unique smells of fynbos. Unwind and find solidarity moments as you gaze down upon the Mother City.

The summit also boasts a cafe and curio store to grab a snack if you’re feeling peckish or to take some souvenirs and gifts home with you.

What animals are found on Table Mountain? 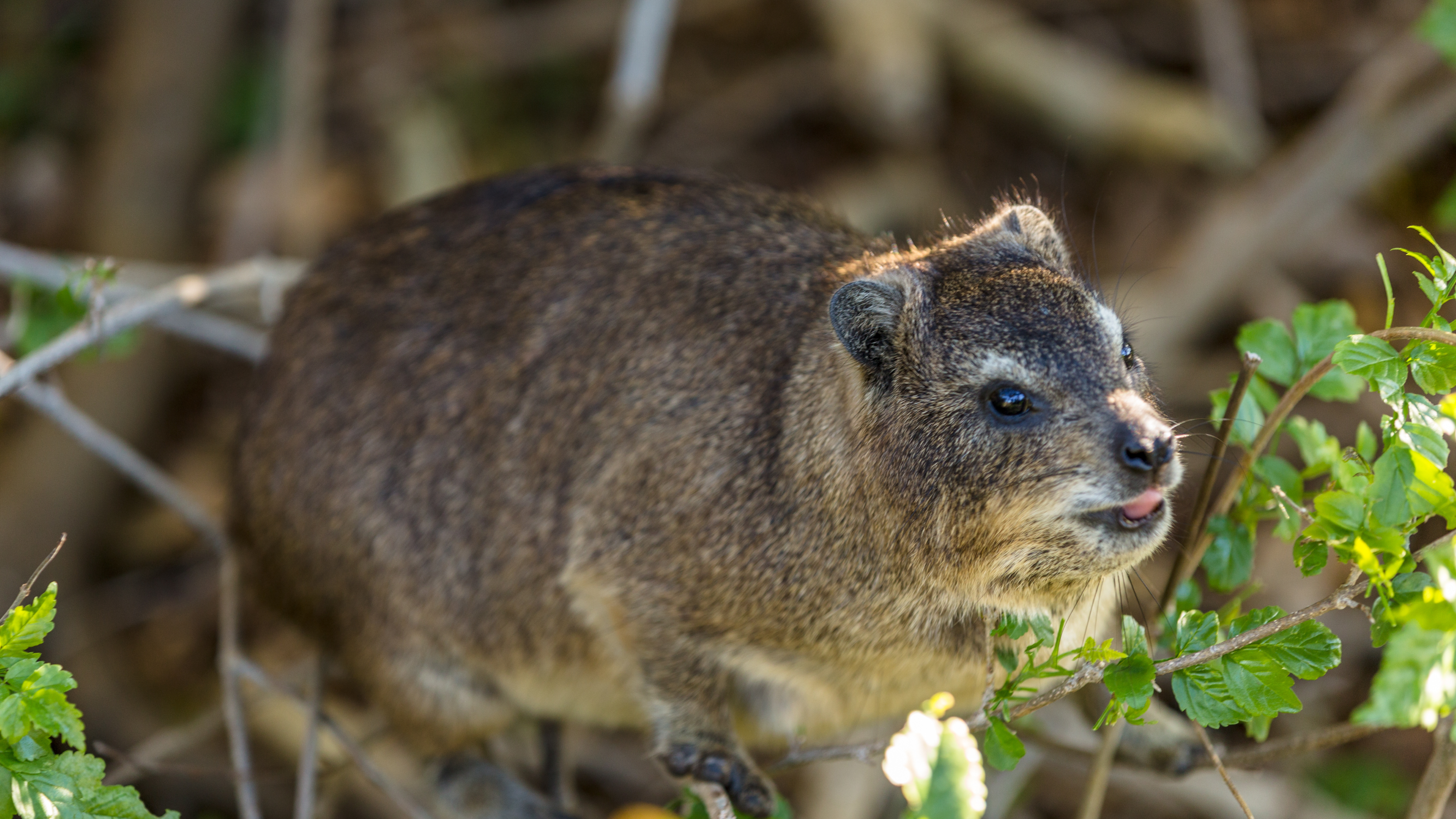 The most common animal found on the mountain is the rock hyrax or dassie, a mammal that resembles a guinea pig or looks a bit like a rabbit, but its closest relatives are in fact the elephant and the sirenian. Table Mountain is also home to porcupines, mongooses, snakes, lizards, tortoises, and a rare endemic species of amphibian that is only found here: the Table Mountain ghost frog.

Table Mountain has an incredibly diverse range of plant and animal life, most of which are endemic. This means they are not found anywhere else. In the national park, there are 8,200 plant species.

Table Mountain is thought to be one of the oldest mountains in the world. The rocks at the base of the mountain are shale and the rocks on the western side are Cape granite.

We would recommend that you bring something warm even on summer days, just in case, as the weather can quickly change and it can get cold and windy at the top of the mountain. Even if the forecast is good. 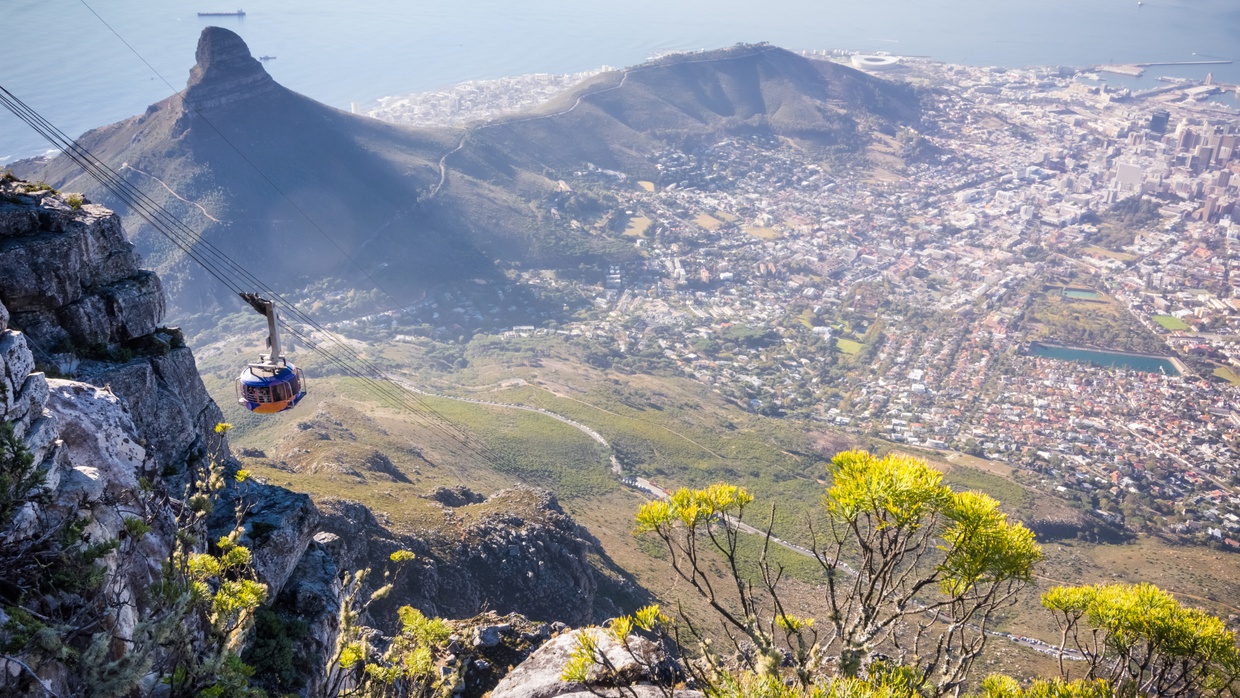 The original name given to Table mountain by the indigenous Khoisan people was Hoerikwaggo, which means ‘Mountain in the Sea’.

Portuguese explorer, Antionio de Saldanha, was the first European man to hike Table Mountain. He did so in 1503 and named the mountain Taboa de Cabo. This means ‘Table of the Cape.’ Following this, around 1652, Dutch settlers started calling it Tafelberg, which translates as Table Mountain.

Despite its flat summit, Table Mountain does have a high point. Not exactly a peak or lofty spire, but a humble outcrop elevated 20-odd meters above the surrounding landscape. Marking the spot is a 3-meter-high stone cairn known as Maclear's Beacon. The highest point of Table Mountain is 1086 metres (3563 feet) above sea level.. It is named after Thomas Maclear who was the Astronomer Royal at the Cape. In 1865, Maclear instructed his assistant to build a stone cairn on the top of Table Mountain for use in a trigonometric survey. The plateau is often covered in orographic clouds, which is known as the ‘Table cloth’. The plateau is flanked by Devil’s Peak to the east and by Lion’s Head to the west.

Table Mountain got its name because of its flat top. The flat plateau is approximately three kilometres (2 miles) from side to side. 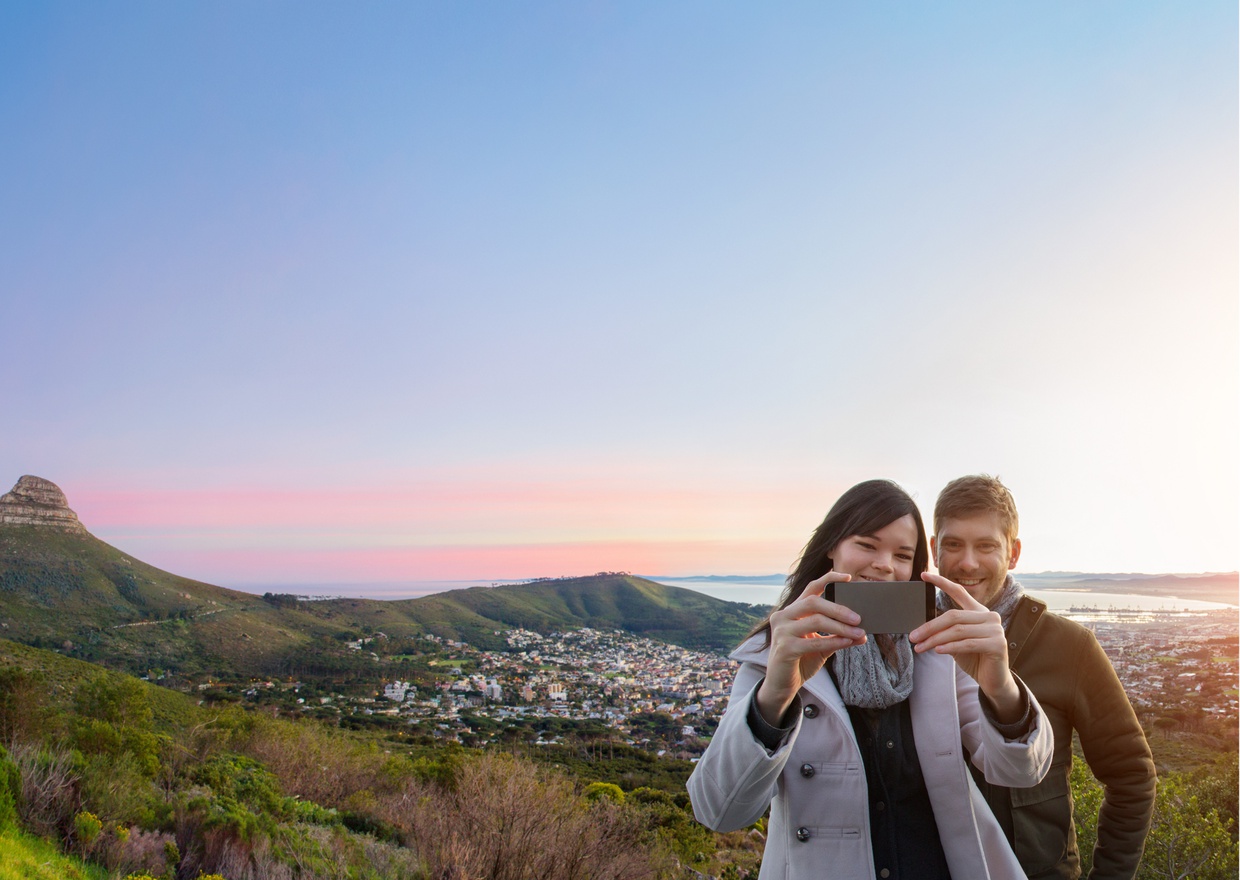 Discover the many attractions Cape Town has to offer on this full-day Cape Town sightseeing tour. See the best and top highlights of Cape Town City such as the Bo-Kaap, Kirstenbosch Botanical Gardens, Camps Bay beaches, historical Museums, Monuments, and the beautiful Table Mountain.

Hit all the top highlights of the Cape Peninsula with photo opportunities at the colourful houses in Bo-Kaap & Maidens Cove. Summit to the top of Table Mountain with a rotating cable car and see 360 degrees of breathtaking views of Cape Town. Take a boat ride to Seal Island in Hout Bay. Enjoy a scenic drive through world-renowned Chapman's peak. Discover spectacular sights at Cape Point and see adorable penguins at Boulders.