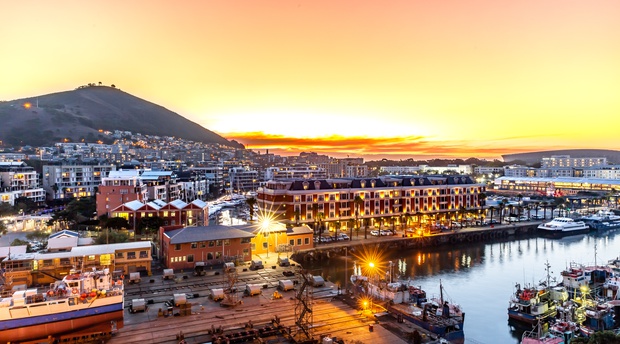 Explore the trendy V&A Waterfront, a tourist hotspot in Cape Town and a must see highlight on your Cape Town vacation. Because this is a private Cape Town tour, you'll have the time to enjoy all the sights at your own pace.

Experience a tasty food market, ride the Cape big wheel or explore the Two Oceans Aquarium. With the iconic Table Mountain as its backdrop, this makes the V&A Waterfront a fond favorite for local and international visitors. 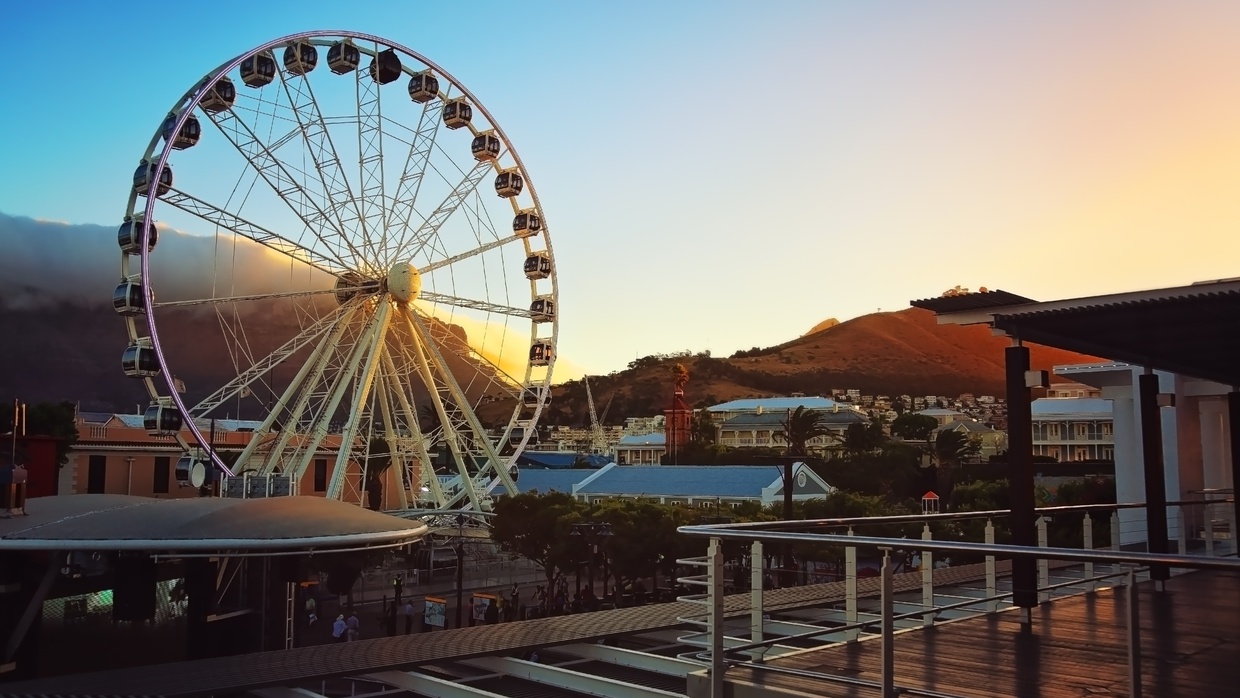 Discover the Victoria and Alfred Waterfront

Often shortened to V&A Waterfront, it was designed by Adrian van der Vyver and named after England’s Queen Victoria and her son, Prince Alfred. The V&A Waterfront is centred around South Africa's oldest working harbour, and is a vibrant precinct that has attractive shopping center's, food and craft markets, the Two Oceans Aquarium, hotels, and other attractions. 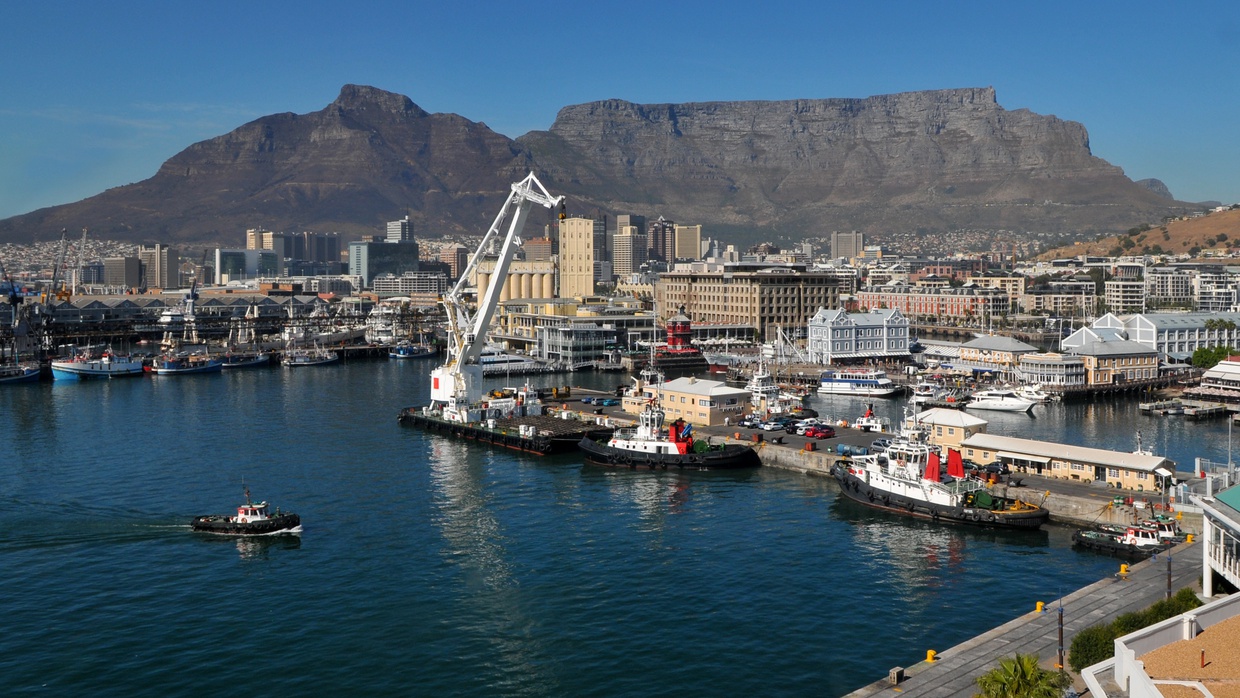 The V&A Waterfront harbour caters to a wide range of vessels and yachts.

The V&A Waterfront is the oldest working harbour in South Africa and fishing boats bring in fresh fish, and larger container ships are towed in by tugboats. Its 123 hectares, about 180 rugby fields, are used for far more than just commercial fishing and comprise residential and commercial property, hotels, retail, dining, leisure, and entertainment facilities for local and international visitors.  Famous people like Elton John, David Beckham and Madonna have bought property in this beautiful area.

Where is V&A Waterfront?

The Victoria & Alfred Waterfront in Cape Town is situated in the Table Bay Harbour and located at the foot of Signal Hill and washed by the deep blue Atlantic waters. The Waterfront is Cape Town’s tourist showpiece—a place where the crowds gather to shop, eat, drink, socialize, and admire breathtaking views of Table Mountain. There are many ways to spend your time at the V&A Waterfront, with activities ranging from helicopter tours of the Mothercity to dining at some of the city’s top-rated restaurants and sightseeing attractions that are family friendly. 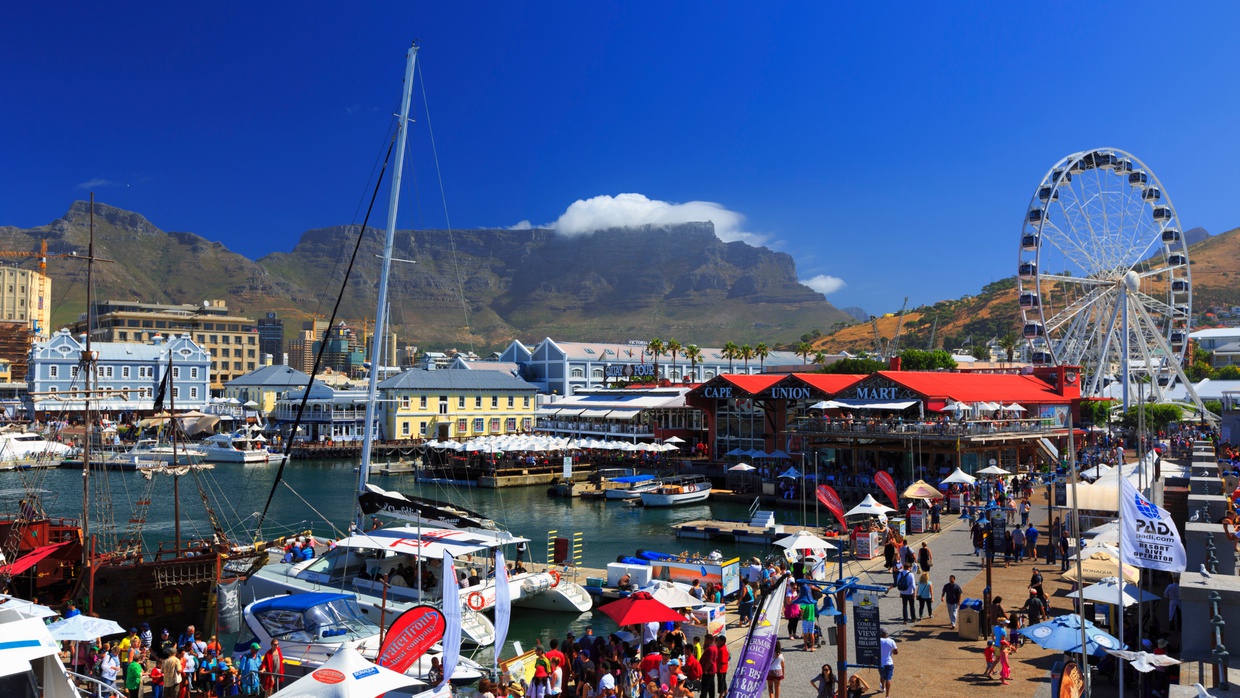 Shopping at the V&A Waterfront

With more than 500 stores, you’ll find everything from local designers to big international brands. The V&A Waterfront is divided up into five shopping districts: Victoria Wharf, the Watershed, The Alfred Mall and Pierhead, The Clock Tower, and Breakwater Point. For crafts and local talent, make sure you pop into the Watershed, and if it’s art or jewelry you’re after, head over to The Alfred Mall and Pierhead.

The climate of Cape Town is considered Mediterranean with mild, wet winters and dry, hot summers. The average July low temperature is 45°F (7°C) while the average January high is 79°F (26°C). 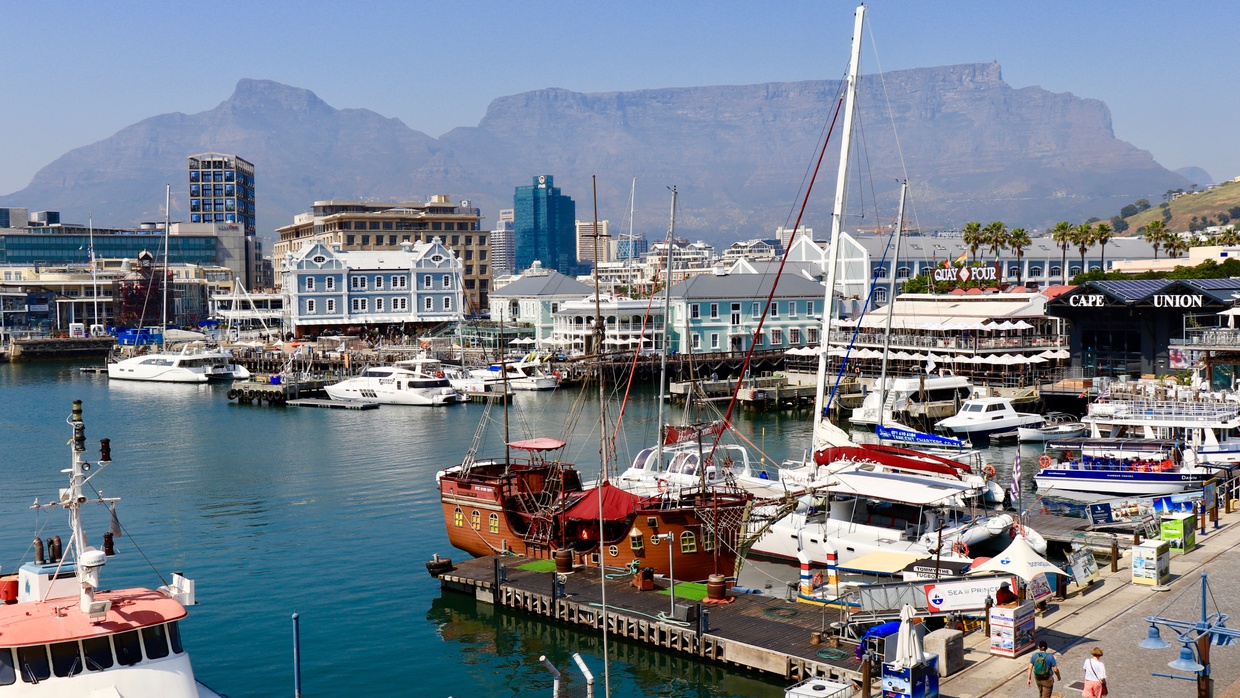 Top Things to Do at the V&A Waterfront, Cape Town

South Africa’s legislative capital is known for its rich history and thriving modern culture; and nowhere are these two elements more apparent than at the V&A Waterfront. The V&A Waterfront is also the gateway to Robben Island, one of Cape Town’s top cultural attractions.

Get to know more about South Africa’s most visited destination, the V&A Waterfront, on a guided tour. Home to 22 landmarks, its rich and varied history which dates back to 1654 when the first jetty was built by famous Dutch colonist Jan van Riebeeck, as part of his mission to establish a refreshment station for the Dutch East India Company.
Your guide will introduce you to the landmarks that make up the area’s rich history and give you the opportunity to discover the history of this landmark destination, where the cultures of the early Dutch, Flemish and British have  blended with those of the Malay slaves and sailors from all corners of the globe.

Tours last approximately 1.5 hours and depart daily from Chavonnes Battery Museum at 11:00 a.m. and 2:00 p.m. Tickets cost R150 per person, and are free for children younger than 5.

The Two Oceans Aquarium offers the chance for you to experience the incredible diversity of the Indian and Atlantic Oceans at one of Cape Town's top tourist attractions. See magnificent and immaculately maintained displays of sea creatures from all over South Africa and beyond. Meet ragged-tooth sharks at the Predator Exhibit, walk-through an underwater tunnel or fall in love with the adorable Penguin. For a truly immersive experience, consider signing up for a scuba dive alongside turtles and rays in the I&J Ocean Exhibit.

Shop for Arts and Crafts at the Watershed

You'll find a huge and light-filled warehouse at the Watershed, that provides space for more than 150 individual vendors. These merchants offer the very best South African art and crafts with many of the designers high-quality products being made locally in the Cape Town area. Don't miss a visit to the Watershed’s Jubilee Exhibition Hall, which hosts regular live entertainment, workshops, and exhibitions. Several stalls sell food and there's a children's playground at the entrance near the Two Ocean's Aquarium. 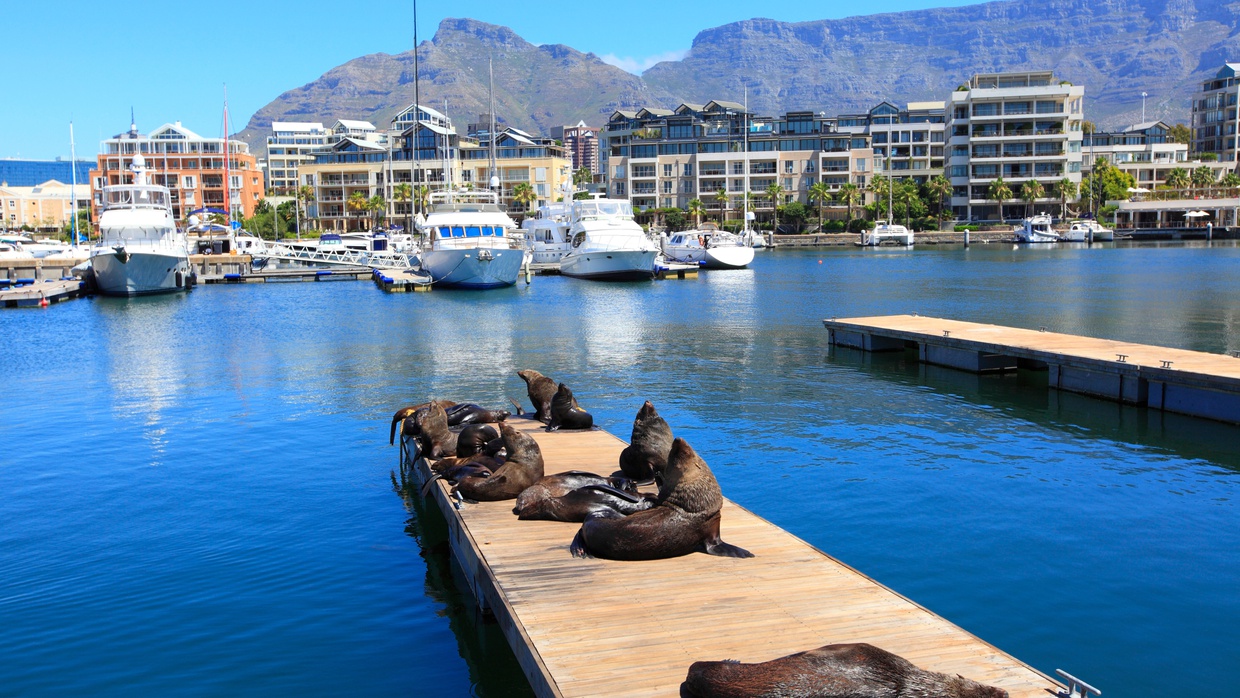 It boasts plenty of history, old and modern along with its natural beauty. Nothing speaks to this more than the iconic Big Six Cape Town attractions.

The Big Six is made up of Cape Point, Groot Constantia, Kirstenbosch, Robben Island Museum, Table Mountain Aerial Cableway, and the V&A Waterfront 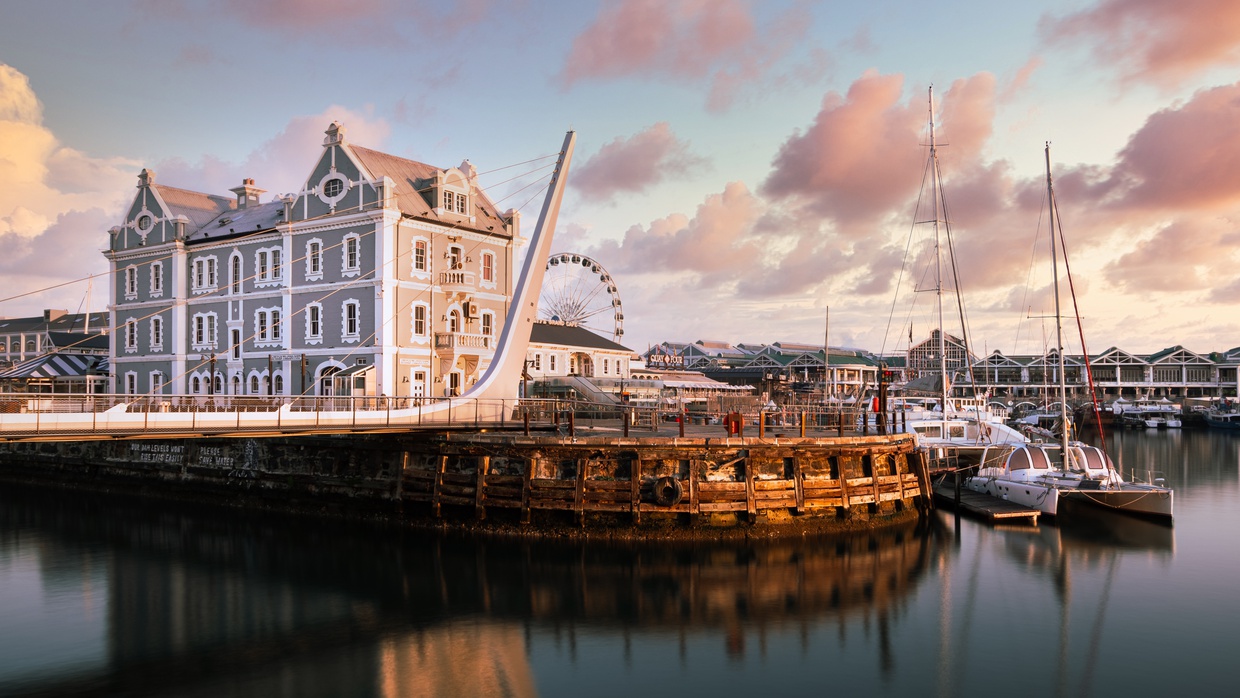 There are many ways to spend your time at the V&A Waterfront, with activities ranging from helicopter tours, leisure boat cruises, dinning at some of the city’s top-rated restaurants and sightseeing attractions. More than 80 eateries bring a fusion of both international and local cuisine, from rustic al fresco to fine dining. You are spoiled for choice with 12 hotels, over 500 retail stores, five museums and live entertainment 365 days a year showcasing the best local music. Along with 22 heritage sites and tourism landmarks, the V&A Waterfront is also home to Zeitz Museum of Contemporary Art Africa (MOCAA) – the historic Grain Silo with the world’s largest collection of contemporary art from Africa. 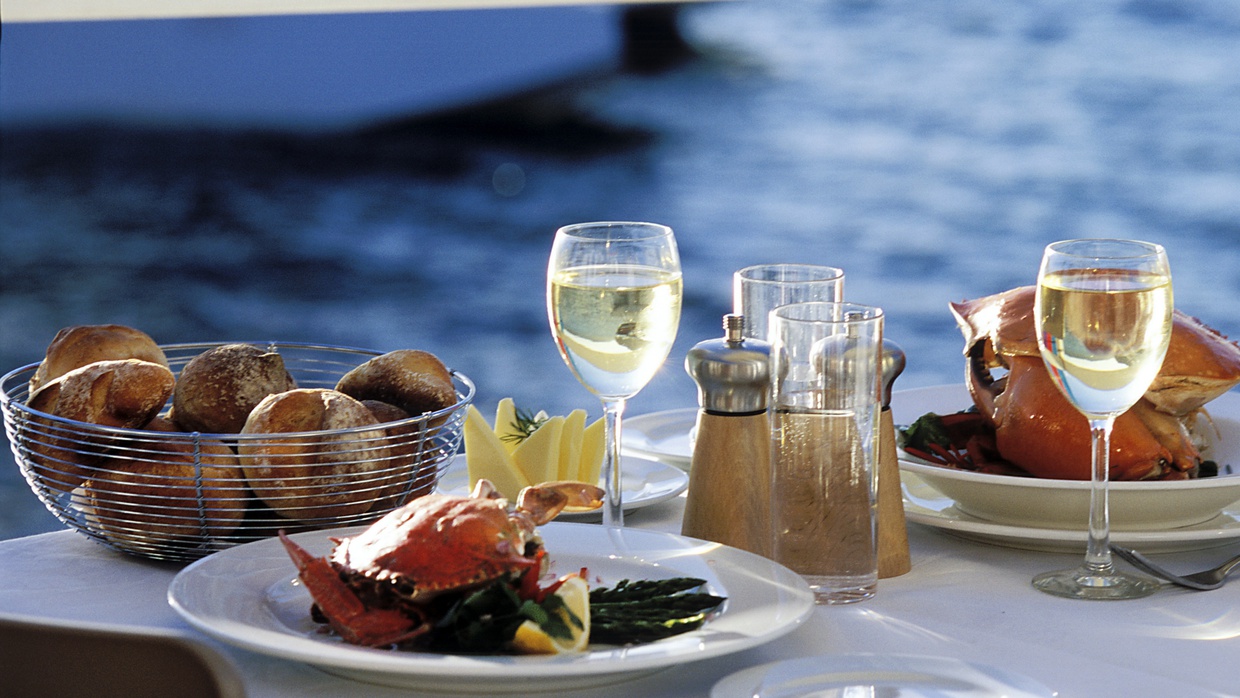 Feel the excitement as the helicopter lifts and floats away to take you over one of the most beautiful sites in the World. Take a 30 minute harbour boat cruise at V&A Waterfront. Hit all the top highlights of Cape Town's inner city on a guided tour with stops to the Bo-Kaap, Table Mountain, Maiden's Cove, Chapman's Peak Drive with wine tasting at Constantia wineries or wander the spectacular botanical gardens in Kirstenbosch.