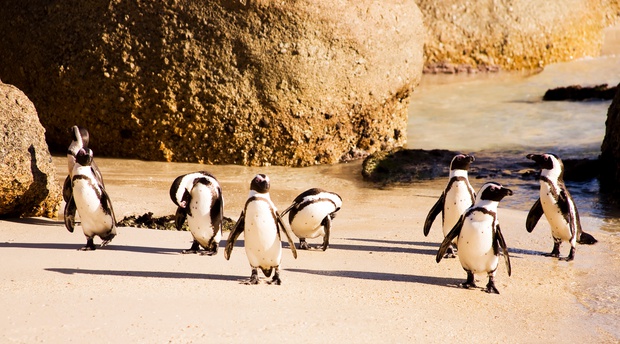 The Peninsula penguins tour takes you to Boulder's Beach in Simon's Town which shelters a penguin breeding colony of more than 3000 endangered African Penguins. This beautiful wind-sheltered, white-sandy beach offers up-close views of the adorable Cape Town penguins along wooden walkways, footpaths, and beaches with the added bonus of being able to swim with the boulders beach penguins. 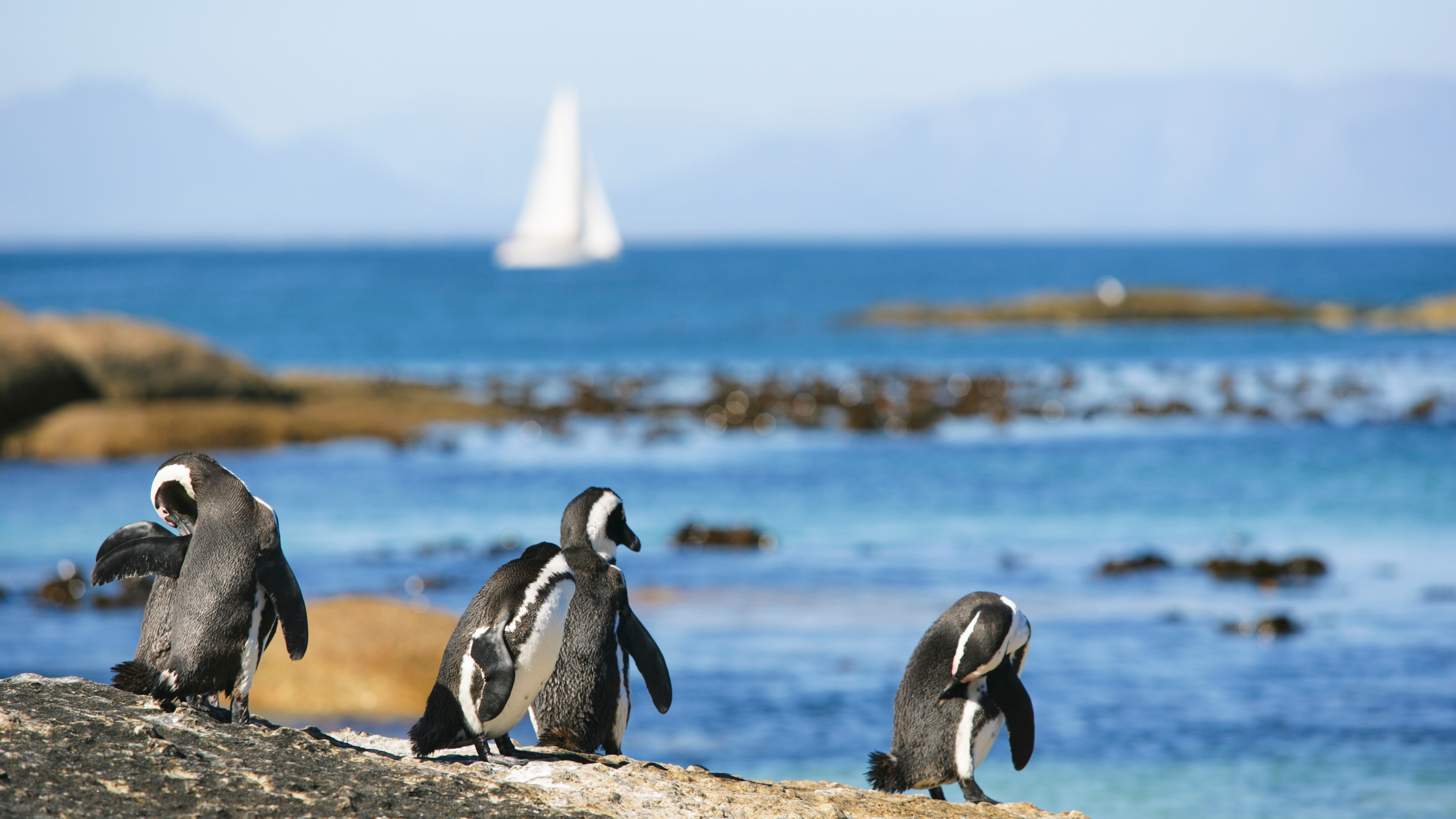 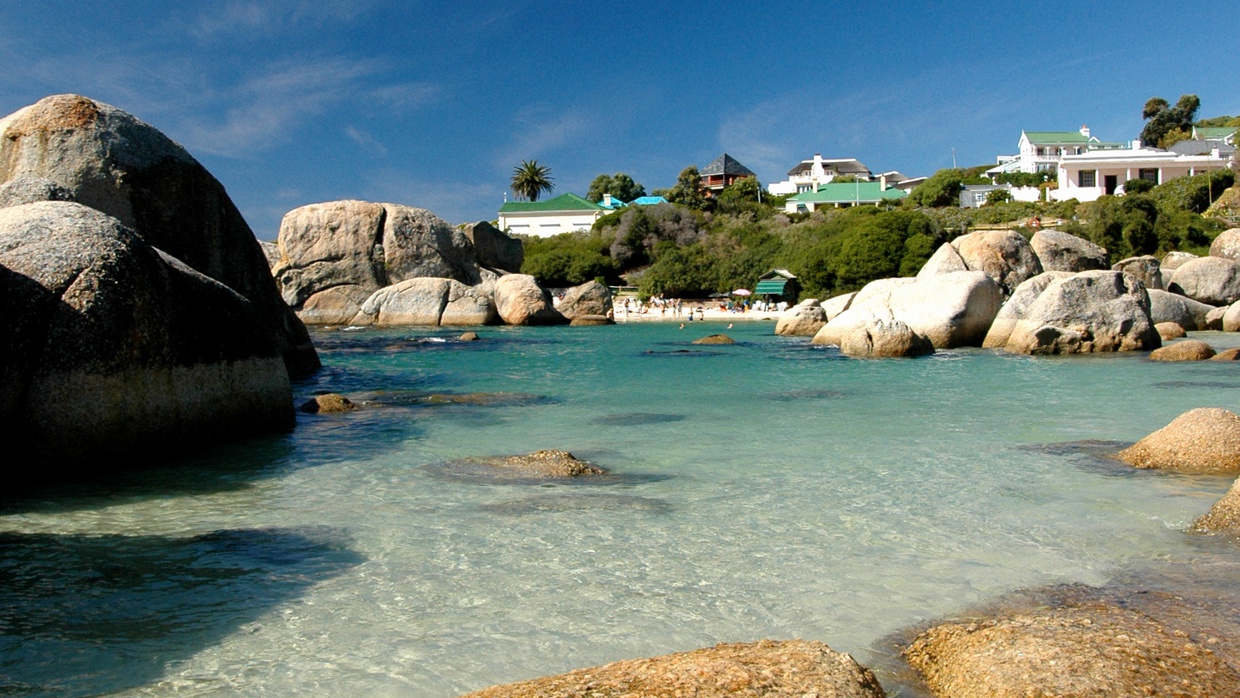 Boulders Beach is found in the middle of a residential area, between Simon’s Town and Cape Point along the False Bay coastline in the southern Cape peninsula.

Have fun trying to spot the quirky penguins at Boulders Beach on a private guided peninsula penguin tour. It is a unique experience and one of the few places in the world where African Cape penguins can be observed at close range, as they wander freely in a protected natural environment. 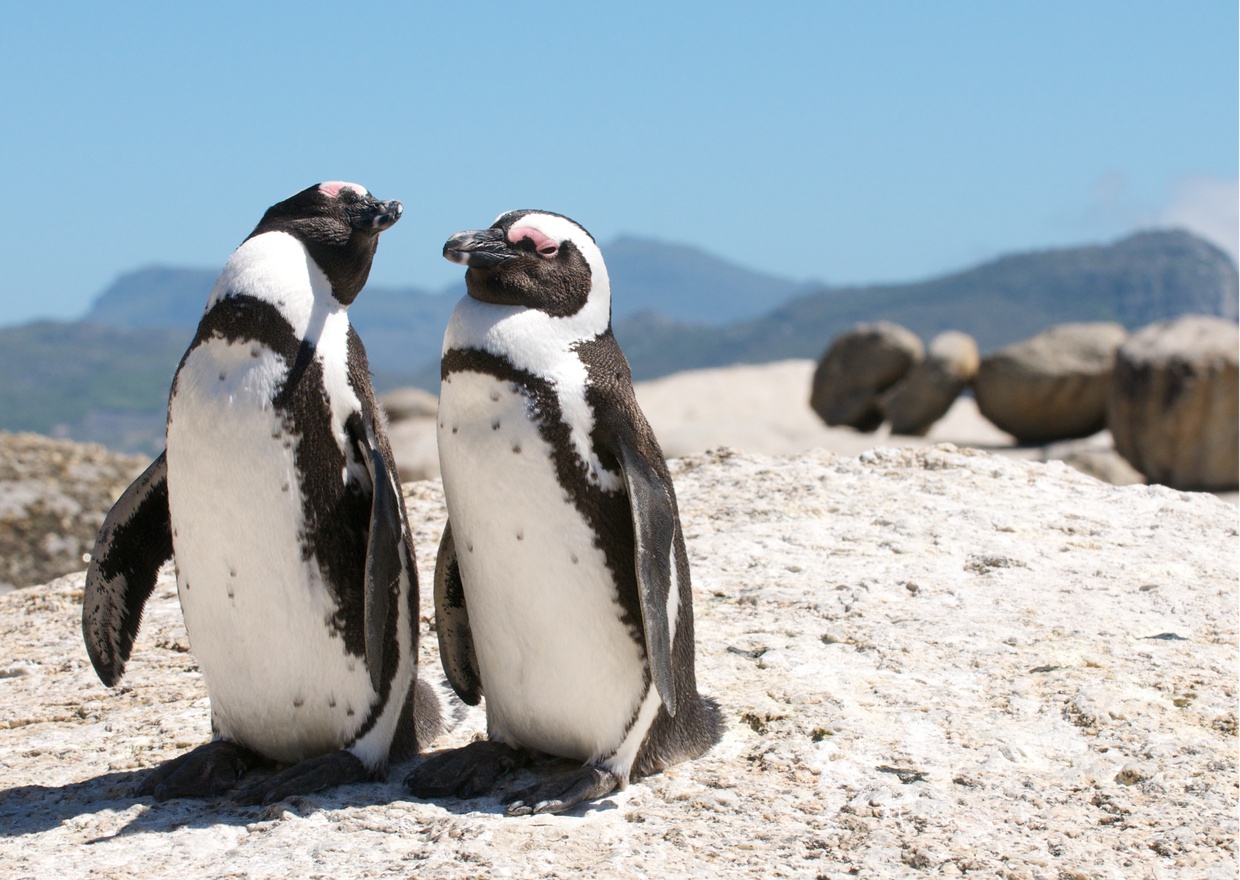 Boulders Beach has grown rapidly to over 3000 penguins since 1982, when two breeding Jackass penguins arrived and settled from Dyer Island, near Gansbaai.

Explore Boulders beach at your pace 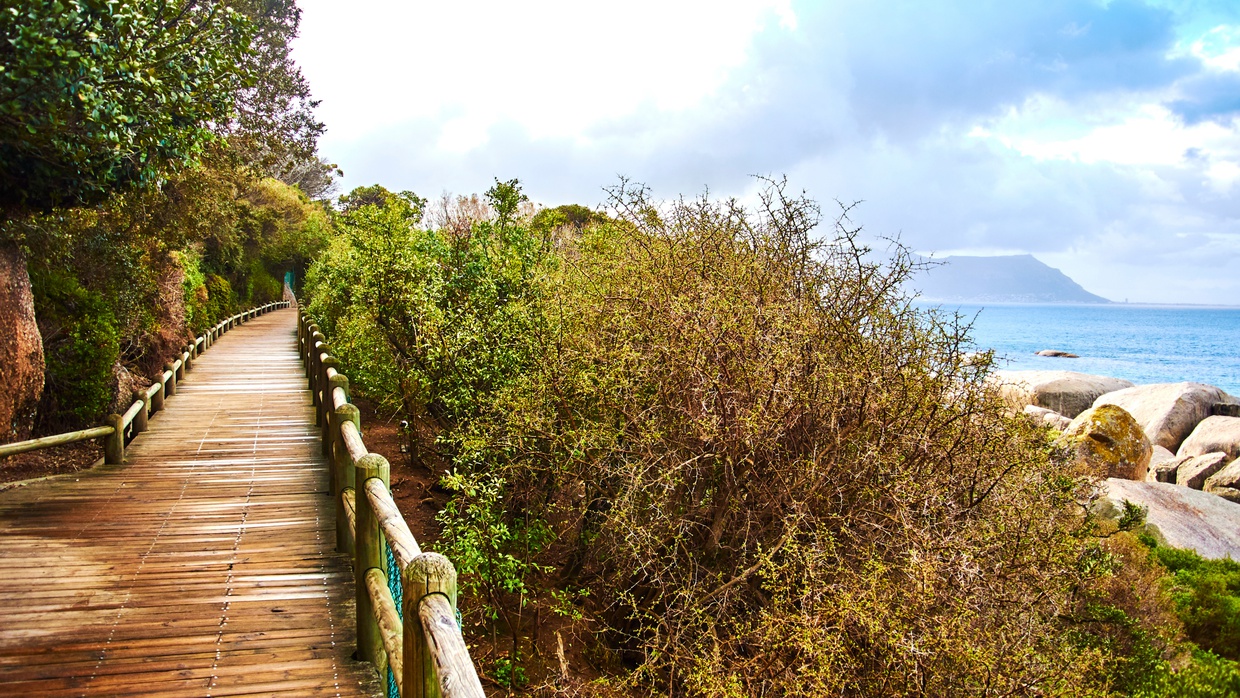 Take an intimate penguin tour along superb wooden walkways at Foxy beach just a short stroll from the actual Boulders Beach to view the Cape penguins and their nesting and breeding sites. The main colony centers on neighboring Foxy Beach, where boardwalks have been constructed to allow visitors to admire the penguins without disturbing them.

Th penguins of Boulders Beach are a species unique to southern Africa, and they look quite different from their Antarctic cousins. Adult African penguins are only 2 feet (60 cm) tall, and have a distinctive black stripe across their white chests. Each penguin also sports a handful of black spots in a pattern that’s unique as a human fingerprint.

The first pair of breeding penguins appeared from nearby Dryer island on Foxy Beach in 1982, and their first chicks were raised a few years later. In the years that followed, the colony expanded quickly with an estimated population between 2,000 and 3,000 birds. Purse-seine fishing is banned in False Bay, so the boulders penguin face less competition for the small fish that make up the majority of their diet. Even so, the Boulders penguins are in decline.

Although they can be found all the way from Port Elizabeth in the Eastern Cape to Namibia, they are most easily (and abundantly) seen here on Boulders Beach (and its neighbouring Foxy Beach). 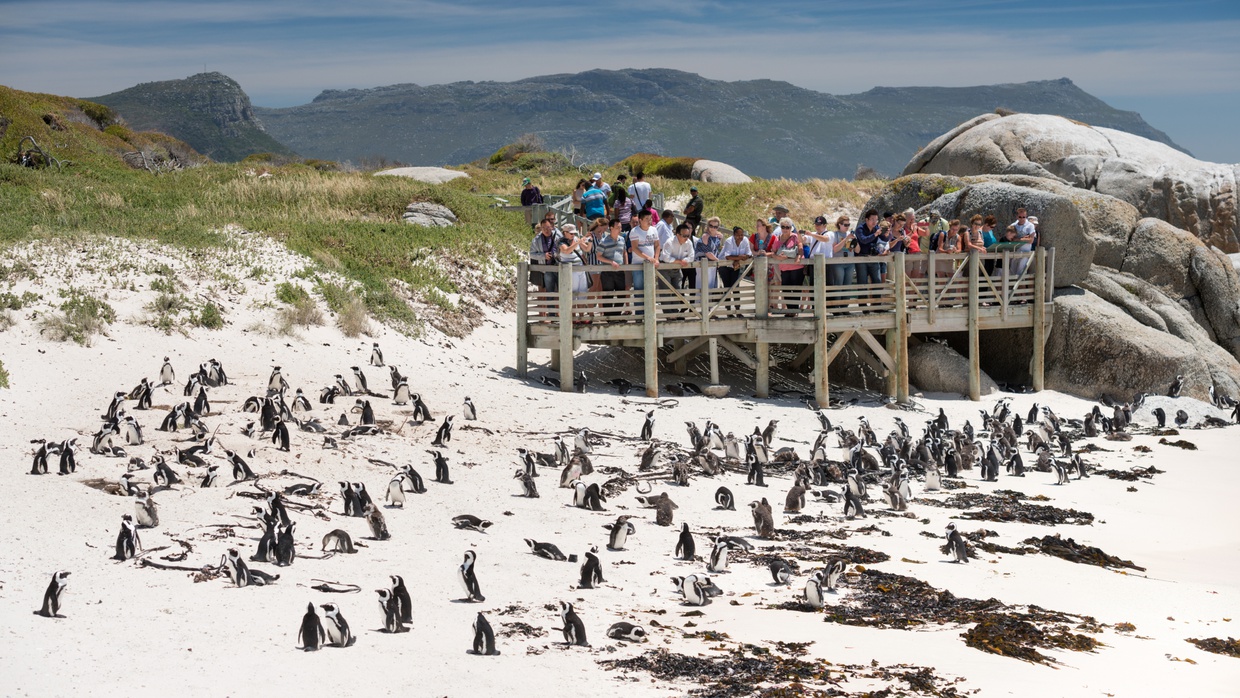 The best things to do at Boulders Beach

Boulders Beach is one of Cape Town’s most visited beaches and the only place in the world where you get close to African Penguins.

Boulders Beach isn’t just a great place for penguins, it’s also a popular family-friendly swimming beach where kids can climb over the boulders, explore the rock pools, or swim in the cool, clear False Bay water.

It’s also a great place for a leisurely picnic with perfect ocean views of dramatic rounded boulders, lapped by the turquoise of the ocean

In season catch sight of the Marine Big 5 and are the whale, shark, seal, penguin, and dolphin on a whale watching tour or Cape Point boat tour.

Simon’s Town is renowned as a naval base, and has a fascinating variety of boats in its harbour. More than this, it is quaint and charming, and a hotspot for excellent dining. It is less than an hour from Cape Town and the V & A Waterfront.

There is also a visitors’ centre that is accessed on foot using “Willis Walk” from the Bellevue Road in the direction from Cape Point side, or via Kleintuin Road from the Seaforth Road if you're coming from Simon’s Town side. The area is patrolled by park rangers to ensure visitors’ safety and that of the birds. 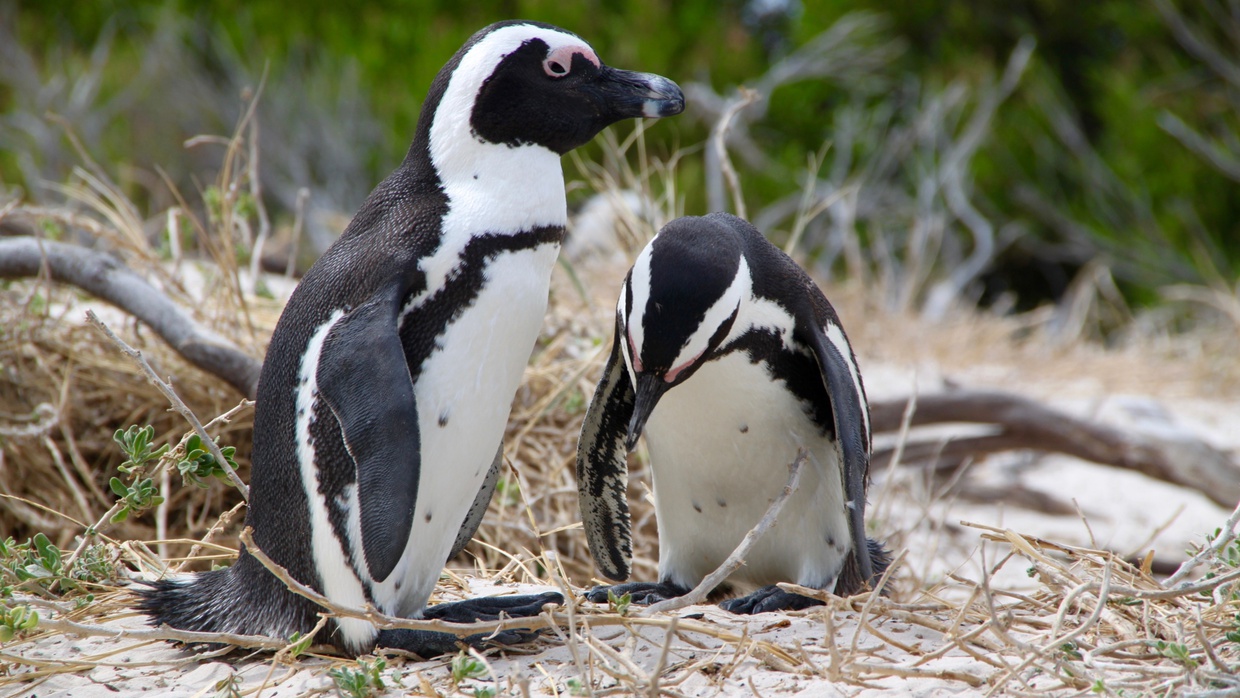 Strictly controlled access to this beach by the South African National Parks (SANparks) authority ensures the beaches are kept clean and tidy and the facilities are well maintained and spotless. These facilities include toi ts and outdoor beach showers.

Boulders beach and boulders penguin colony forms part of the Table Mountain National Park (TMNP) which is a Marine Protected Area and an entrance fee is required to access Boulders Beach penguins.

When To Go to Boulders Beach

You can see the penguins at Boulders beach throughout the year. Between September and October the birds spend much time feeding out at sea, so there are fewer penguins on the beach.

Summer is a prime time to visit Boulders beach and its when you'll probably see the most penguins at Boulders Beach.

The Boulders penguins traditionally breed between the summer months of March and May, when visitors will often see them incubating their eggs. 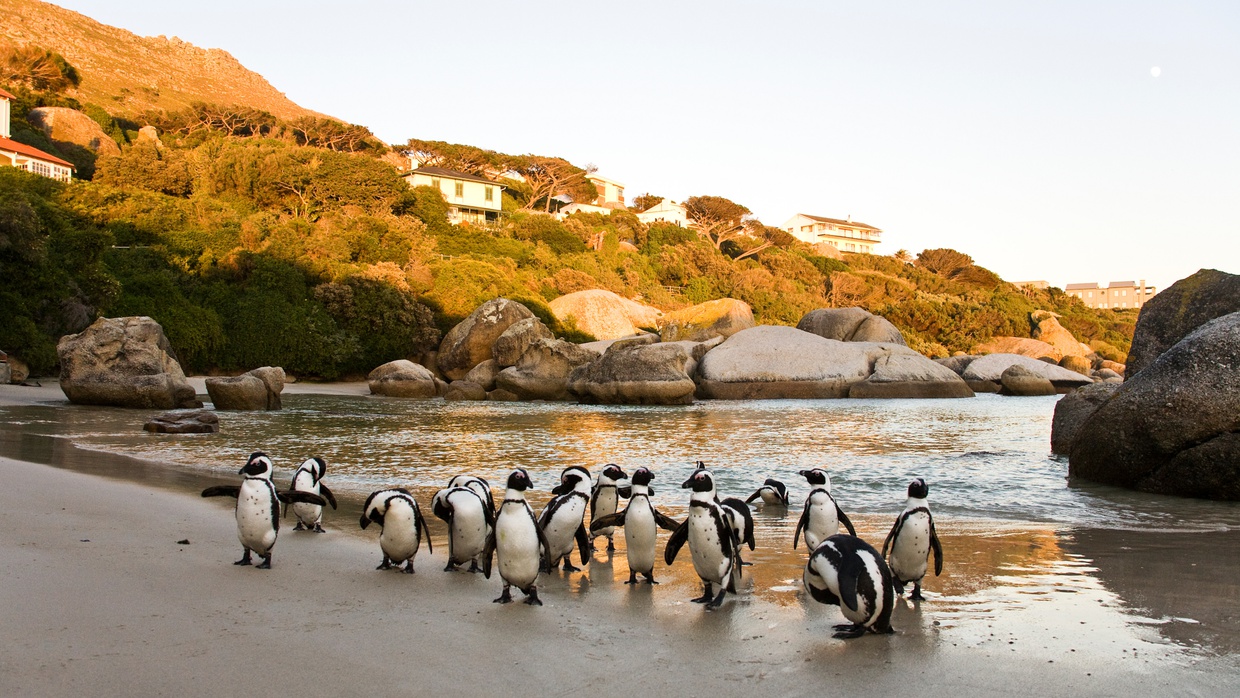 On this Boulders beach tour you'll explore all the top attractions. Once through the turnstiles, stake your claim on the pristine sand and freely explore the large and old granite boulders, small rock pools and little bays in close proximity of the boulders penguins.

The Peninsula penguins tour to Boulders beach is a real hit with families, kids and couples as it offers a very gentle and warm ocean swimming experience. The huge boulders after which the Boulders beach is named shelter the cove from currents and large waves – but always take care.

African penguins– previously called Jackass penguins because of their braying call – might look cute and cuddly but their beaks are razor sharp and if they feel threatened they have no qualms about nipping the odd finger or nose. 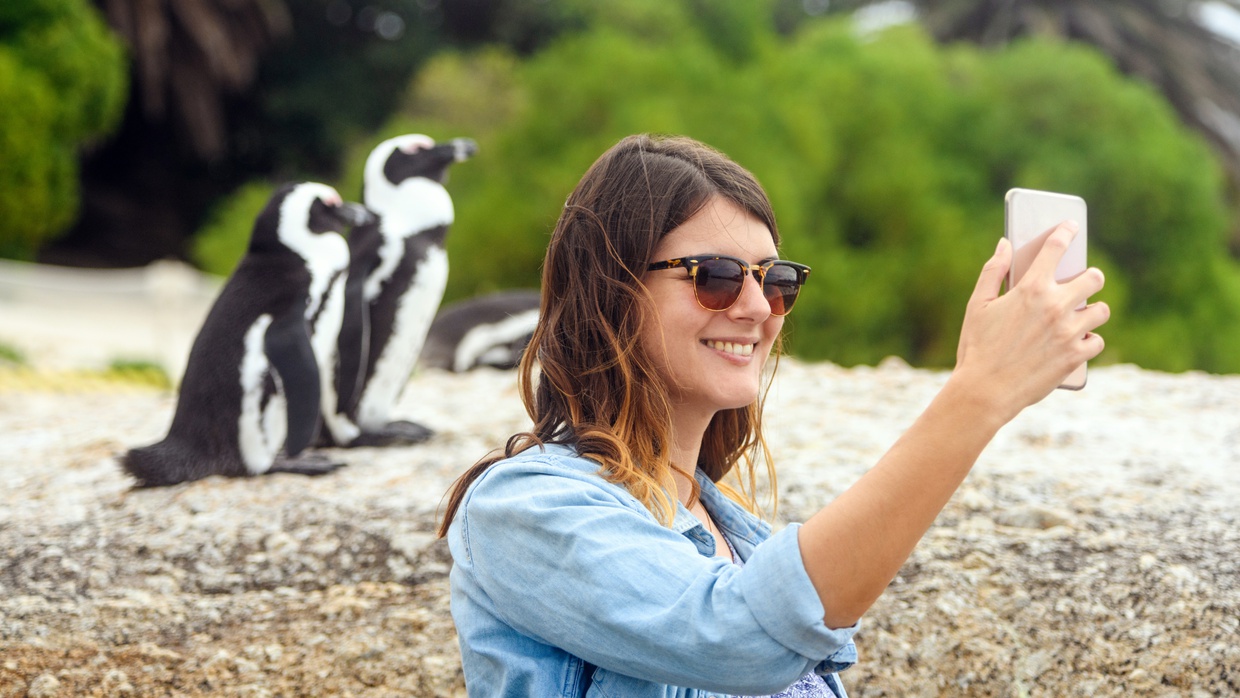 With an expert skipper, embark on an epic ocean voyage and cruise the calm and deep waters of False Bay. Heading towards Cape Point, your captain will navigate the boat to sail along the unspoilt coast of the Cape Peninsula. Whales, dolphins and seals are just a few of the curious and playful sea creatures in the dazzling blue waters of the Atlantic Ocean. Free pick-up & drop-off and Cape Peninsula & Penguin Tour

Hit all the highlights of the Cape Peninsula with photo opportunities at the colourful houses in Bo-Kaap & Maidens Cove. Take a boat ride to Seal Island in Hout Bay. Enjoy a scenic drive through world-renowned Chapman's peak. Discover spectacular sights at Cape Point and see adorable penguins at Boulders. This full-day private guided tour the Cape Peninsula is one of the best top 10-day tours and trips in Cape town. A perfect addition to your Cape Town vacations and holidays for couples, youth, seniors, and families alike.