Picnicking with elephants- Exploring Addo with Into Tours | ALL4Woman 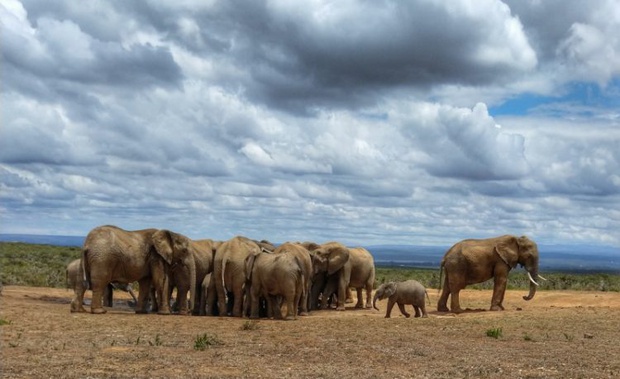 Just a 20-minute drive from the friendly city of Port Elizabeth is the 1 600 square kilometre, malaria-free Addo Elephant National Park. Over the years, the park has expanded, incorporating reclaimed farmland right up to its coastal boundaries. It is one of the few places in Africa where you can see the Big SEVEN – which includes the Big 5 plus the great white shark and southern right whale.

While there are over 600 elephants at Addo, it’s not just about the pachyderms

The park focuses on maintaining a natural biodiversity, and allowing the wild animals to roam freely within the park’s boundaries. Wild hyena, leopard, endangered black rhino, lion, kudu, eland, and buffalo can be spotted. And those with sharp eyes will see the smaller game including some tiny duiker, tortoises, and the world-famous flightless dung beetle. This is the only place in the world where the flightless dung beetle can still be found in large populations rolling up the heaps of elephant dung, and burying their eggs inside.

Addo is a delight for local residents and foreign tourists, and is a destination that I try to visit a couple of times a year. 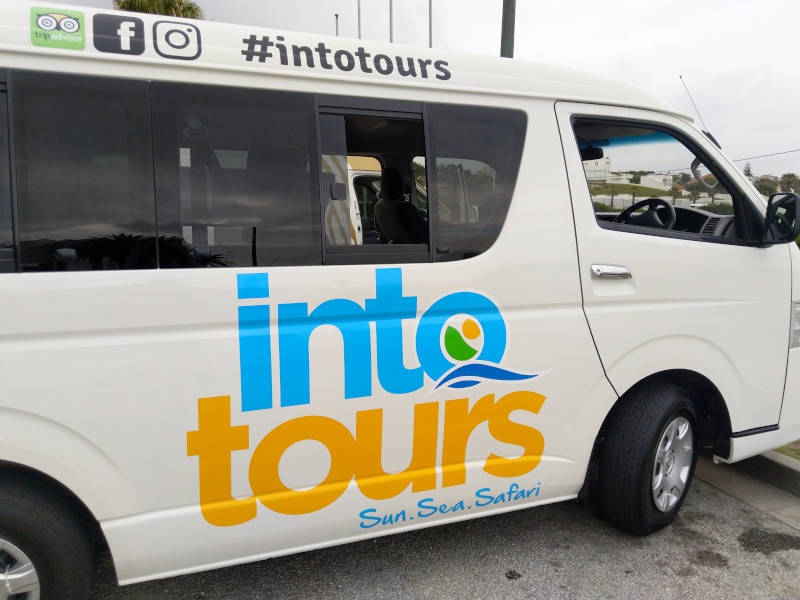 Recently, I took a trip to the park with one of Port Elizabeth’s top tour companies, Into Tours

It was a welcome change from the usual self-drive tour that I do to have a dynamic guide and driver take us to all the ‘best spots’ in the park. Our guide, “King” Elvis is one of the most character-filled tour guides I’ve ever met. PLUS he has magic eyes. He can spot animals behind trees, under bushes, and around corners! He was able to point out creatures most of us would have driven straight past thinking that they were ‘shadows’ or ‘rocks’. 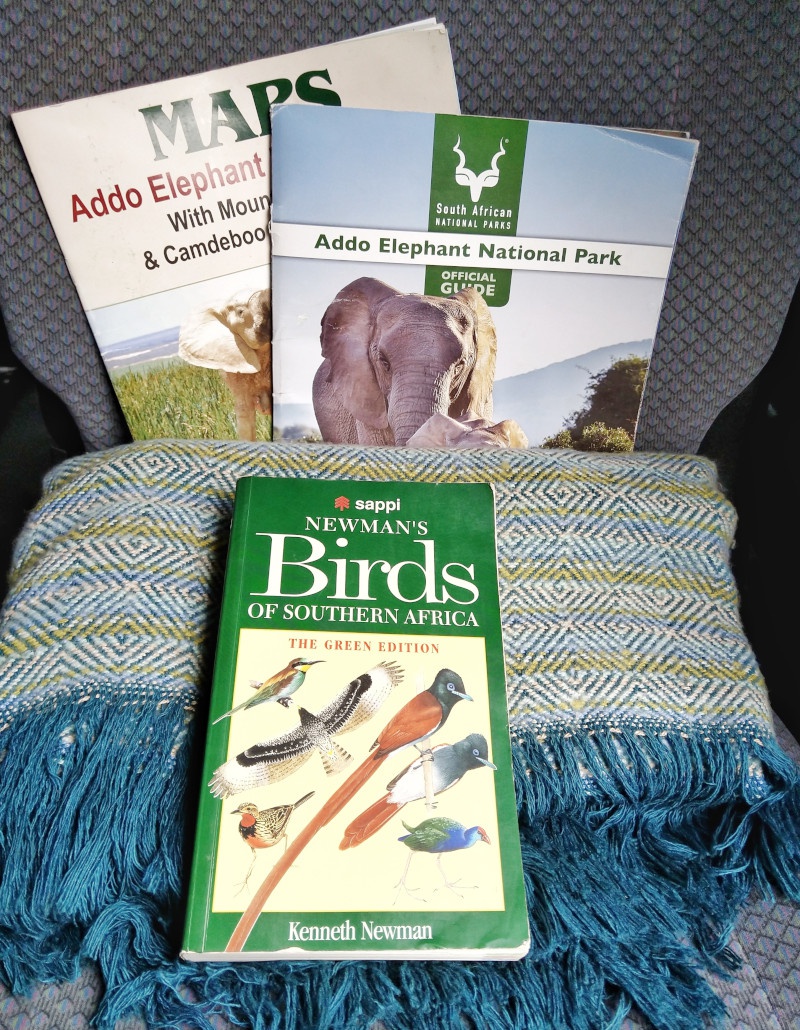 We headed out to Addo on a misty Saturday morning in “Gus the bus” – a comfortable air-conditioned minibus. There were blankets for anyone who felt the early morning chill, and some welcome bottles of water to keep us refreshed while we were enjoying the trip. For anyone who wanted to learn a little more about the local wildlife, Janina Parker from Into Tours provides a helpful collection of bird and animal guide books to browse through on the journey. 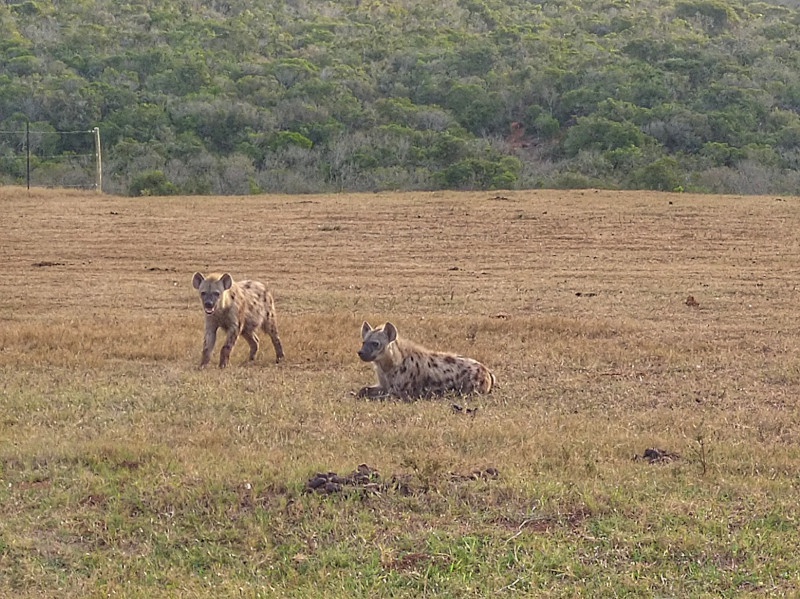 Just a few minutes after entering the park, “King” Elvis spotted a black-backed-jackal scavenging off a carcass. According to Elvis, two large bull elephants had recently had a vicious fight, which ended in one being fatally wounded. The carcass had provided a week-long feast of plenty for the resident scavengers, with fourteen hyena being spotted on one day. I had never seen a wild hyena, and asked Elvis if he’d be able to locate some in the park. He laughed, and said he’d do his best.

I was not disappointed!

As we rounded the corner, we came across four large spotted hyena that were also gnawing away at a few of the larger elephant bones that had been left behind. It was a real thrill to watch them in their natural environment, and it was fascinating to see how similar their characteristics are to domesticated dogs. 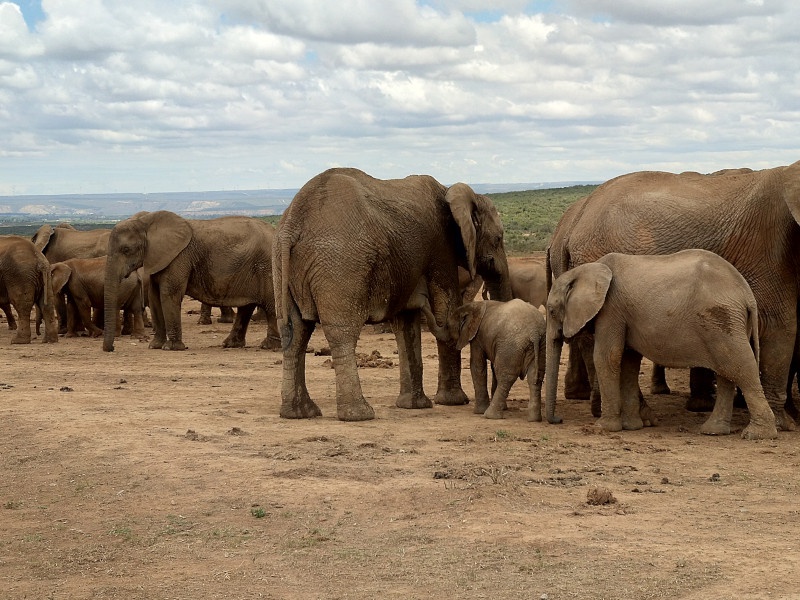 While the morning started off misty and overcast, the day began to heat up quickly, sending the animals towards the water holes for some midday relief. The highlight of the trip was watching great herds of elephants taking turns to splash around at Hapoor Dam. Mothers and their tiny babies were just metres away from our vehicle, showering themselves with the cool, refreshing water, and coating their backs in slick brown mud to shield their skin from sunburn.

Some of the brave youngsters even ventured into the middle of the water hole and lay down in the squishy mud, sounding little trumpets of glee as they enjoyed the cool hiatus from the summer’s day. But one stern trumpet from mum, and they obediently headed back into the bush, allowing the next family to take their turn.

The incredible family dynamics of elephant herds have been widely documented, and it was a privilege to be allowed to be a part of their midday gathering, watching the different hierarchies interacting, and the respect that the matriarch of each family commands.

On our drive to the Main Camp, we came across some red hartebeest, zebra, and several tortoises.

At the Main Camp, Elvis unpacked a spectacular picnic lunch for us, and we spent an hour or so enjoying the cool breeze, and watching a smaller family of elephants that had gathered around the water hole just outside the picnic area. They were joined by some skittish warthog and some raucous Egyptian geese. 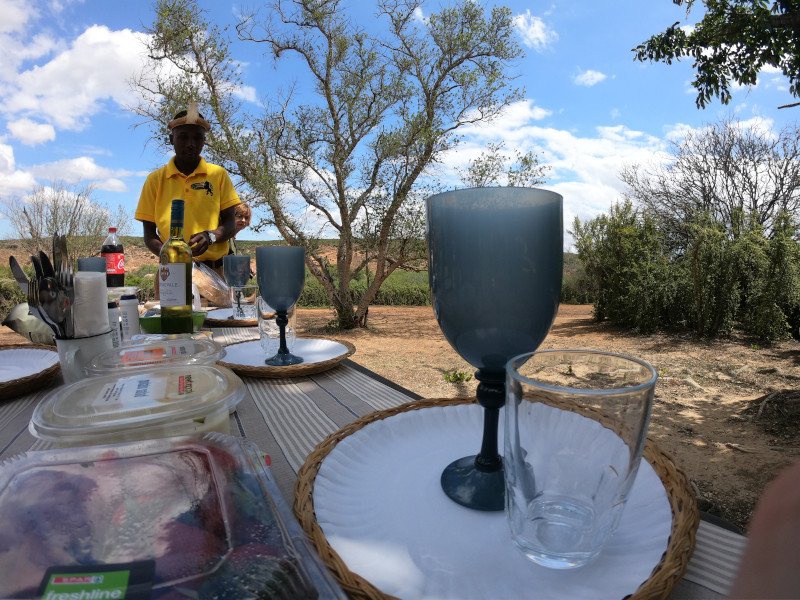 For the second half of our trip, Elvis took us back through the park along a different route to where he hoped we’d spot some lion. Unfortunately, with only seven lion in the entire park, the big cats were playing hard-to-find. We did, however, catch a rare sighting of a black rhino and her calf. They were some distance away, and we would never have seen them if it weren’t for Elvis’s ‘magic eyes’. The pair were browsing happily on some foliage across a small ravine. 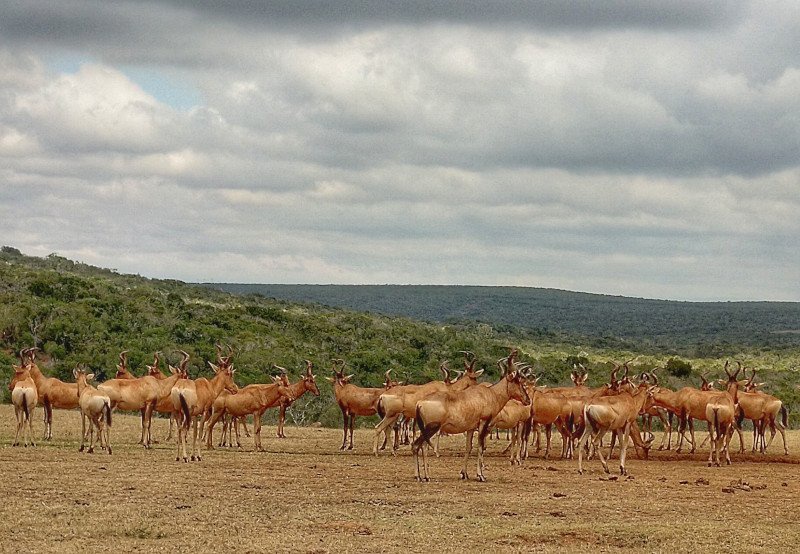 Some red hartebeest grazing on the plains (Photo by Claire Warneke)

While it was tough to spot them with the naked eye, Into Tours has some helpful binoculars for guests to use, and we were able to follow the rhino and her baby’s movements. Due to the horrific poaching activities taking place in South Africa, the Addo rhinos are heavily guarded and tracked by a dedicated team of antipoaching rangers. 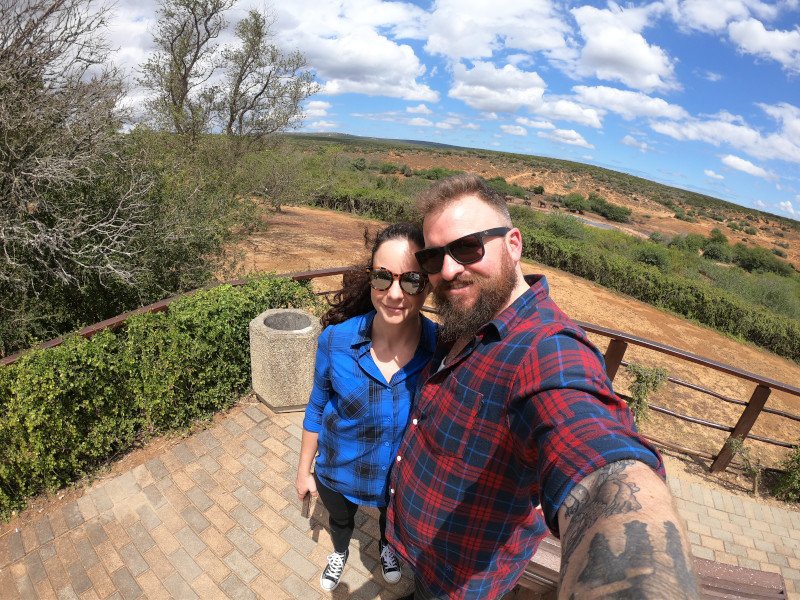 As we headed out of the park, we came face to face with a beautiful mother buffalo and her young brown calf who were heading up the dirt road together. The mother gently nudged her calf off the path and into the safety of the dense foliage, and as we watched them disappear, we marvelled at the incredible wealth of wildlife contained in a relatively small area of our beautiful province. 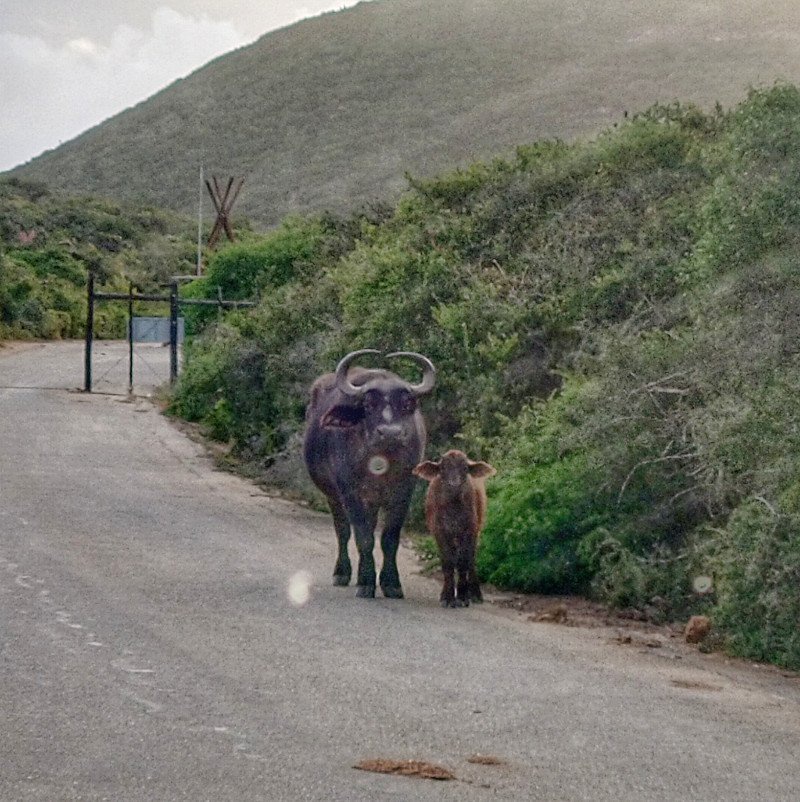 As a Port Elizabethan, I often take our city for granted

The spectacular white sandy beaches, the friendliness of the local people, the relatively easy way of life, the rich and diverse history, and the close proximity to wild open spaces like Addo Elephant National Park. Port Elizabeth has it all, and more. The place I love to call ‘home’ has brought wonder and joy to so many visitors. 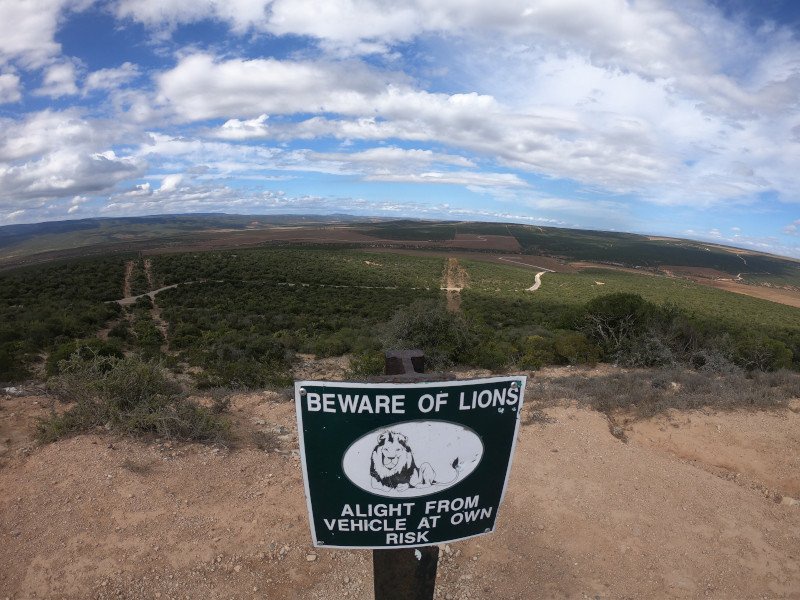 It was uplifting and heart-warming to share the Into Tours trip with some foreign tourists, and to join them in their excitement whenever we spotted a new animal. I would highly recommend Into Tours for their professional service, character-filled guides, and passion for Port Elizabeth and everything the Eastern Cape has to offer.

They also offer a range of city tours, sandboarding and adventure tours, and safaris in other Eastern Cape game reserves.

Check out other great blog posts by Claire from  All4Woman

Don't miss out on tours to Addo Elephant Park